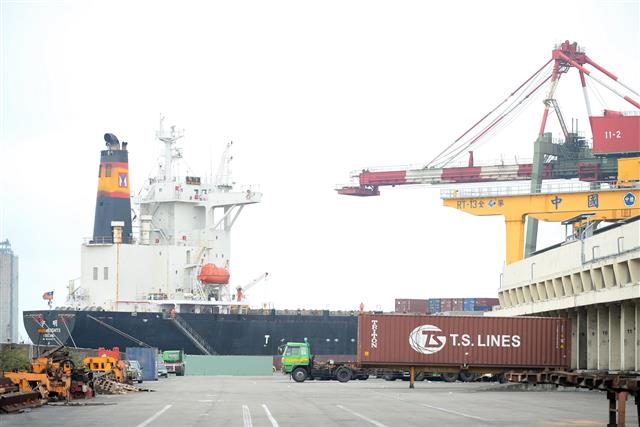 In terms of weight, more than 90% of the world's transnational trade and transport relies on maritime transport, with the rest being mostly transnational land transport, and air transport accounting for only 0.21%. However, the high unit price and efficiency of air transport accounts for 26% of global trade. In 2021, Taiwan air transport in terms of weight accounted for only 0.23% its imports and exports, but because of the contribution of high-tech, semiconductor products, Taiwan saw 47% of the total value its imports and exports came through air tansport in 2021.

The worldwide top-5 cargo airports in 2021 are all located in Asia - in China, Japan, Korea and Taiwan. China is the world's factory, and Hong Kong, which plays the role of a hub airport for inbound and outbound shipments, is also the dispatch center for Taiwan's semiconductor parts warehousing. Since the 1970s, when the East Asian economy was on the rise, Hong Kong has been a global leader with its free port efficiency and neutral political environment.

As for the differences between Taiwan and South Korea - which have similar industrial structures - in the field of air transportation, we can examine how geopolitics and technology industries affect the transportation system at the time of the war between Ukraine and Russia.

In addition, the maritime market is facing a shortage of ships, workers, vehicles, port congestion, and even canal blockage, and air freight is clearly more advantageous. It is expected that in 2022 and 2023, sea freight will still be in demand, but the proportion of air freight will continue to increase, only that air freight will also have many new variables due to the war between Russia and Ukraine.

When it comes to geopolitics, we can spread the map to explore how many alternative routes there are once Asian countries cannot fly over Siberia to Europe, and what are the related impacts? For example, if we cannot fly over Russian airspace (Siberia) because of the war, Japan Airlines and Korean Airlines will have to fly over Canada and then to Europe, which will take about four hours more, which is an obvious cost in times of high fuel prices.

Fuel costs are the most expensive cost for airlines and a huge operational risk. Before the war between Russia and Ukraine, the oil price was around US$80 per barrel, and after the war broke out, it even climbed to over US$130. As long as the war does not end, even if Venezuela and Iran join the ranks of increased production, the changing oil price will keep the transportation cost high.

Taiwan can go south to Europe via India and Dubai, and the other way is through Kazakhstan to Europe, but there are still many considerations concernign which routes to take. Siberia is close to the Arctic Circle and is the closest route to Europe from East Asia. In the past, Russia, which straddles three time zones, has been knocking on everyone's back and demanding high transit fees.

In addition, cargo flights to the US usually stop in Anchorage for refueling because cargo planes are heavy and not suitable for direct flights to the US. Anchorage is also one of the two major oil-producing regions in the US, and gasoline is cheaper.

As for the shipping routes in East Asia and the Western Pacific, Taiwan is the country with the advantage of being located in the middle of the Western Pacific Ocean, but of course this also involves the country's shipping and industrial development strategy. For example, Japan and Korea in North Asia are more favorable than Taiwan in terms of access to North America and Europe, but when the Japanese and Korean operators go to ASEAN and South Asia, Taiwan can receive a lot of transit fees and business opportunities in transit.

In terms of supply chain changes, the future when ASEAN and South Asia start to see their electronics industries take off, the shipping industry in Taiwan will have a greater advantage.

Colley Hwang, president of DIGITIMES Asia, is a tech industry analyst with more than three decades of experience under his belt. He has written several books about the trends and developments of the tech industry, including Asian Edge: On the Frontline of the ICT World published in 2019, and Disconnected ICT Supply Chain: New Power Plays Unfolding published in 2020.
Categories
Chips + components IC manufacturing ICT manufacturing IT + CE IT components, peripherals
Tags
commentary editorial logistics President of DIGITIMES President of DIGITIMES Asia
Share this article
Other links
Print
Related content
Related stories
Dynamic supply chain management is the new normal
We have to live with geopolitics and epidemic
Industries and logistics support each other
An era of high inventory
Can China come from behind and win the race?
Who dominates the global semiconductor market?
Geopolitical climate is changing global semiconductor value chain
Industry watch: EV industry's strategic initiatives for carbon neutrality
Industry watch: Semiconductor industry turning point beyond 2025
Related topic
Opinions
Opinions