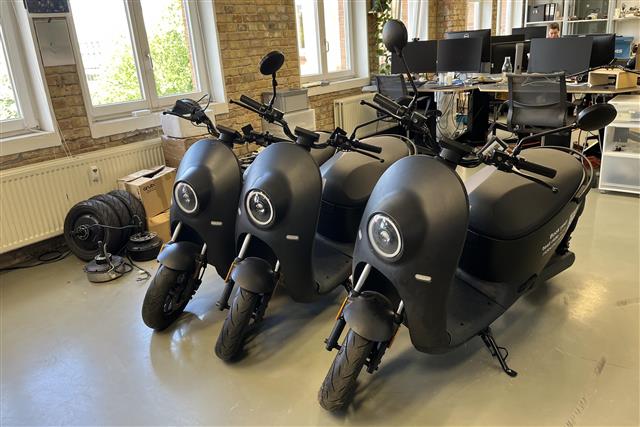 E-mobility can be life-changing, especially when you live in big cities and getting stuck in traffic is your daily routine. Unu Motors (styled as unu) is providing a life-changing, time-saving solution to Europeans, starting in Berlin, Germany.

"It was the best product I have ever bought," referring to the first electric scooter he got while studying in Beijing, China, Pascal Blum, co-founder of Berlin-based e-scooter manufacturer Unu Motors, said he would otherwise waste so much time catching buses, connecting trains, and walking from one destination to another. Owning an e-scooter increased the possibility for him to enjoy life in a big city.

E-mobility indeed suggests a different lifestyle in Berlin. With electric scooters, you can go to work without worrying about being late because of traffic or train delays. Riding electric kickscooters, which are now very popular in touristic areas in Europe, is an alternative way of observing the city. Berliners are now quite familiar with ride-sharing electric scooters and cars as well. They bring people together fast and conveniently.

One of the challenges to promoting e-mobility in Berlin, however, includes the lack of charging points and strict speed limits. 30% of Unu's customers pay extra for a second battery pack, which provides a combined 100km in range on a full charge. But beyond that range, Blum said they are looking to partner with stores to provide more charging points.

Unlike most Asian countries where both penetration of e-scooter and population density are high, Blum said building battery-swapping stations all over the city would not be as viable in Berlin. It is still worth mentioning, though, that the Taiwan-based e-scooter and battery-swapping service provider Gogoro almost succeeded in deploying its battery network in Berlin a few years ago, but the project fell through.

Blum said Unu ensures that customers have access to repair and maintenance services by reaching out to local garages for partnership so that customers even in the suburbs are still able to access its after-market services. Currently, Unu has 350 partnered garages, most of which are Bosch garages.

Shared e-mobility has gained more popularity in the past few years in Berlin; however, the use of electric kickscooters is still debatable among Berliners, and current traffic regulations require electric scooter riders in Berlin to have a license and to drive within a speed limit of 20km/h.

Blum pointed out that riding an e-scooter could be an alternative to driving a car or taking public transport, but "people do expect higher speed," he added.

Germany remains Unu's biggest market in terms of sales, but competition is heating up outside of Germany. The biggest electric scooter market in Europe is the Netherlands, followed by Spain. Paris is also imposing stricter rules on the use of petrol scooters, so demand for electric scooters is expected to grow significantly in the EU.

Unu has just launched services in the Netherlands and will soon launch in Paris. Blum sees sales of electric scooters to take off from this year onwards since the transition to electric mobility is already underway.

At the height of the pandemic in 2020, Unu was unable to produce anything for more than six months as most of its components were sourced in China. Its supply chain team took the time to switch to new partners and component supply has since been running so much more smoothly.

Unu ships its scooters from its warehouse in Berlin and it generally takes 2-3 weeks to deliver to customers' doors.

The company plans to offer more options for customers. It is working on a new model that is more economical than the current premium ones. It will also launch a battery subscription that allows customers to have batteries renewed and the company to recycle retired batteries for other applications.

Unu has an engineering team that designs and develops car parts and the scooter. It has a showroom located in the center of Berlin.