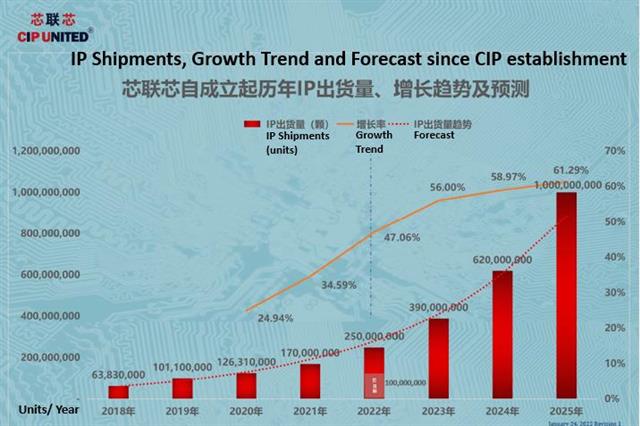 Over the past two decades, hundreds of millions of chips developed and shipped based on the MIPS architecture by eminent Chinese chip companies such as Ingenic Semiconductor, Actions Semiconductor, Montage Technology, and Spreadtrum Communications have become the cornerstone of "Chips Made in China".

Up to the end of 2021, CIP United has licensed IP exceeded 500 million units. Referencing to Loongson's IPO documents, in the Chinese market, its total number of shipment of chips based on the MIPS architecture authorized Loongson has contributed approximately 0.55% to CIP United's IP shipment. In net, Loongson chips accounted for about 0.15% of the annual IP shipment in 2018, about 0.37% in 2019, about 0.85% in 2020, and about 0.56% in 2021. In those years, Loongson's yearly shipments volume was ranked bottom amongst the top manufacturers.

Loongson's IPO documents indicate it still has ongoing disputes with CIP United that are subject to pending arbitration related to breach of MIPS Technology license agreement in Hong Kong and pending litigations regarding infringement in China.

In the arbitration, Loongson was alleged by several breaches including without limitation using unlicensed MIPS technologies, modification of MIPS technology, under-reporting or concealing royalties without acceptance of a proper audit by the licensor. CIP United insists Loongson to accept audit, submit all overdue royalty reports of MIPS technology owed to CIP United and pay these royalties as an IPO candidate.

In the litigations, Loongson's 3A5000 chip and its architecture "LoongArch" were sued for infringement of MIIP architectures. Loongson have not yet published LoongArch architecture Volumes 2 and 3, which is not acceptable among the practice in the architecture providers in past decades. According to the "Virtualization[1] Instruction Technology Analysis Opinion" issued by Shanghai Silicon Intellectual Property Exchange Centre Co., Ltd., the virtualization of Loongson's LoongArch architecture is highly similar to that of the MIPS architecture. Further, this analysis report has been endorsed by two leading edged industry experts from the Hong Kong University of Science and Technology and the International Semiconductor Association, a global organization.

Over 20 years, Loongson is about to go public in the STAR Market. Loongson accepted investment from state-owned assets, and therefore is seen as a model of CPU companies in China. It shall further comply with the stringent capital market and intellectual property regulations, and shall make full disclosures that its business, financials, technical independence and products are fraud-less - especially intellectual property issues. Otherwise, it is likely to affect the healthy development of Chinese semiconductor industry, lead to serious loss of state-owned assets, and damage to the public investors and Chinese capital market's international creditability. These discredits are no less than those of the Hanxin scandal, which delayed Chips Made in China over 10 years. The public will continue to keep an eye on these compliance issues in STAR Market. With faith in the regulatory and fair competition, CIP United looks forward to overseeing Loongson's foregoing compliance be properly delivered before official IPO.

CIP United is committed to work with the Hi-Tech communities to jointly develop Chinese semiconductor industry and capital market, strengthen higher protection of intellectual property in China, and support China to become an innovative nation.

*Note[1]: Virtualization is a module of MIPS technology licensed to Loongson.