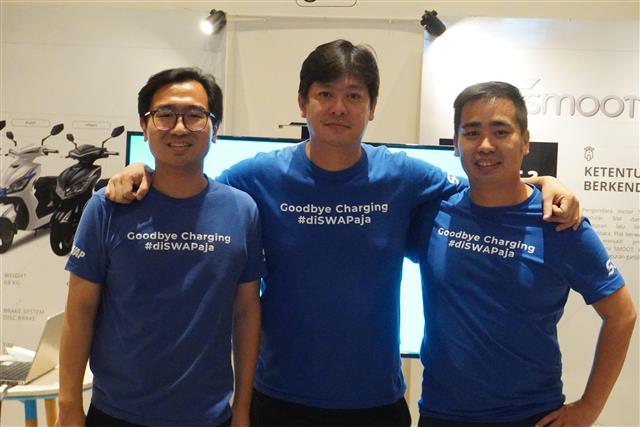 Jakarta-based SWAP Energi co-founder Kevin Phang aspired to advance battery-swapping technologies for electric scooters while he was studying abroad. SWAP Energi and its affiliate e-scooter maker and distributor SMOOT have set up 400 battery swapping stations in Greater Jakarta and Bali, Indonesia, the highest among the top e-scooter brands in the country.

In an interview with DIGITIMES recently, Phang said they are aiming to build up to 1,200 stations within this year because "the lack of charging infrastructure is one of the factors that keep people from converting to electric vehicles." SWAP's goal is to build a battery-swapping station every kilometer down the road.

Phang recalled that he bought his first e-scooter with a lead-acid battery in 2006 in China. Back then, public chargers were limited and all needed to share. In some mornings, Phang would be all set to go to school and found out that someone has unplugged the charger, leaving his e-scooter low in power.

So Phang and his friend eventually dragged the vehicle up to his apartment and charged it at home. To bring the vehicle up was inconvenient, but it was better than sharing chargers and trying his luck in the parking lot until the Chinese government banned charging vehicles at home after a few explosions have taken place.

Safety can't be emphasized enough by carmakers. SWAP uses LFP batteries for its low risks of fire despite lower energy density than NCM batteries. Smoot's e-scooters have 50-60 kilometers in range and users can subscribe to one of its mileage plans with unlimited battery swaps.

Users can find SWAP's stations at some of the local chain convenience stores Mini Mart and gas stations in Greater Jakarta and Bali. As a popular tourist resort, Bali serves as the demo ground of SWAP's battery-swapping system welcoming the G20 Summit this November, noted Phang. How to make it cheaper?

Although the Indonesian government's goal is in line with the global trend of electrification, it mostly focuses on cars and batteries for electric cars. For e-scooters, the government waives the license plate fee, which is 10% of the price of the vehicle and provides some benefits such as free parking. Phang said the pricing of e-scooters remains the biggest obstacle in having people shift from gas-powered scooters to electric ones.

In Indonesia, premium brands of e-scooters could cost IDR30-60 million (US$2,080-4,100). Pricing is the biggest reason why people are not enthusiastic about it, said Phang.

Owning an e-scooter also incurs a lot of hidden costs, such as costs for a new battery when the old one degrades. That is why Phang firmly believes that battery swapping is the only way – it is safe, fast, and feasible. SWAP provides three mileage plans from 100km, 250km to 500km. Users can pay INR80,000 to ride 500km with unlimited battery swaps within 60 days.

Indonesia is a huge two-wheeler market, yet the penetration rate of e-scooters in Indonesia was only 0.3% last year with 5 million gas-powered scooters sold, and Honda's scooter brands still dominate the market. There were less than 10 e-scooter brands in 2019 and that number has increased to almost 20, so the competition could get more and more intense. However, Phang acknowledged that in order to make the market grow faster, other scooter makers are more like friends than competitors, and there is the possibility to license the battery-swapping technology to different scooter brands.

SWAP's sales of e-scooters represented only a small fraction of the 15,000 new registered e-scooters last year. Eyeing the market potential, Phang said its goal is to reach 50% of total new e-scooters in the next five years, which is 10 times higher than its current market share.

The company was founded in 2019 but already it has a team of 60 employees. They need a lot of people to handle customer requests and problem-solving and to take care of the battery swapping stations. It opened its first showroom last August and the second showroom is scheduled to open this year.

SWAP has collaborated with state-owned electricity company PLN, Grab, Paxel, and a local bank that provided promotional deals for customers. Phang said they are announcing a new partnership soon this summer, but he could not reveal further details.

Phang noted that after COVID lockdowns, the Indonesian government needs to distribute the surplus of electricity that was allotted to factories to more battery-swapping stations.