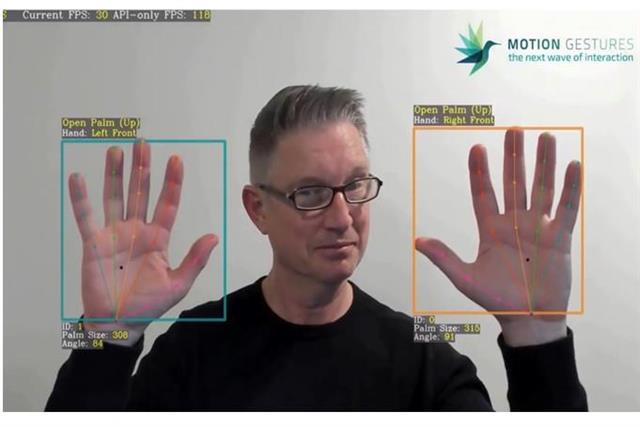 Move a thumb to unlock a car door. Self-check-in at an airport without touching the kiosk. These are no longer scenes in the movies but what technology is capable of nowadays. Motion Gestures, a Canada-based startup, has brought sophisticated camera-based hand tracking and gesture recognition solutions to various industry verticals, offering transformative experience to the modern world.

Chris Paine, Motion Gestures' global director of business development, said the founders have backgrounds in utilizing AI and ML in natural language understanding. They always said, "We communicate with our mouths, but we work with our hands." The statement shows it was natural for the founders to move to gesture recognition.

The company did not come out of stealth until 2020, the middle of the COVID-19 pandemic, and has seen the demand for gesture recognition and contactless interaction grow exponentially.

According to Paine, Motion Gestures has engaged with more than 25 industries. Its accurate joints skeleton-based approach sets the startup apart from competitors. The software tracks precise positional coordinates of all hand joints in real-time through a camera and interprets any gestures made. For example, the gesture could be a thumbs up or OK symbol and dynamic movement like tapping and swiping. An application developer or product engineer then uses recognition results to execute a command such as "Confirm."

"There's one statement that we use, which says that 'we can track accurately any hand movement or any gesture, regardless of its complexity," Paine said.

The director added that Motion Gestures has reduced gesture software development time and costs by 10 times with AI and ML. It also has improved gesture sophistication and recognition accuracy to nearly 100%. While using the technology does not require gloves, as the movie Minority Report shows, Paine said the software can still track the hand movement of someone wearing gloves. Therefore, it can help doctors check X-rays easily during surgery.

In addition, Motion Gestures' solution work with ordinary cameras and processors. The software is application-agnostic and can be used to enable contactless interaction with almost any product in any industry.

Furthermore, Paine said no data collection is required for custom gesture requests. Instead, the company has developed algorithms that can generate training data synthetically to serve as a proxy for real-life data. The above features significantly reduce gesture software deployment and its costs.

Although the pandemic attracted the public's attention to contactless interaction, hurdles remain in adopting gesture recognition. Paine said one of the challenges is to win people's trust. Since the technology has a decades-old history, some people are still haunted by inaccurate last generation solutions and doubt the capabilities of software available now.

The only way to rebuild their confidence is to show them the enhanced technology. Paine said the solution is far more advanced than shown in the movie and does not need sensor-based gloves and powerful depth cameras to operate. A solution that serves various industries

Gesture recognition can be applied to a variety of industries and products such as augmented reality, automotive, consumer electronics, health care, and home automation. Motion Gestures has seen great interest in the technology from the automotive and digital signage industry.

The startup is working with top automotive OEMs around the world for applications inside and outside a vehicle, ranging from sophisticated interaction with infotainment and navigation systems to keyless entry and tailgate opening.

On the other hand, Motion Gestures has started commercialization in digital signage applications in the US. Recently, it signed a contract involving the integration of its gesture software with BrightSign's digital media players. BrightSign is the largest media player manufacturer in the world, with several million devices installed in retail, travel, hospitality, healthcare, transportation, and amusement park sectors.

According to Paine, Motion Gestures is helping Brightsign create natural contactless interaction with digital content on TV screens. For instance, in the retail sector, gesture interaction is being developed for the enhanced shopping experience. The software will enable customers to swipe through a catalog without touching a kiosk, change the clothes' color to what they like, add a pair of shoes, and send all the items to a fitting room to try on.

In addition, customers can stand in front of the designed smart mirror systems, selecting clothes/shoes/accessories to project on their image. The selection of the items will all be via sophisticated gesture recognition.

After completing two pre-Series A funding rounds, Motion Gestures has acquired investors from countries where it expects to develop business, including the US, Canada, Germany, India, China, Japan, and South Korea.

The startup has built several connections with Asia. For example, its latest funding round was led by Allen Miner, a Forbes Midas List investor famous for helping build Oracle Japan and Salesforce Japan and is opening doors for Motion Gestures in Japan. The company has secured more than a dozen collaborations with top Japanese OEMs.

Moreover, Motion Gestures has formed partnerships with firms in South Korea and China to promote its software with OEMs. Now, the startup is looking to work with Taiwan-based companies that want to embrace hand tracking and gesture recognition technology.

Besides automotive and consumer electronics sectors that can use Motion Gestures' solutions in their end products, Paine said the company is also looking to partner with firms in the semiconductor and optical sensor industries. It wants to embed its software in semiconductor chips and/or integrate with optical sensors used in cameras which then can be sold to OEMs in different sectors. This would proliferate the use of Motion Gestures' tech.

"That will be a tremendous conversation to have with companies in Taiwan," Paine said.