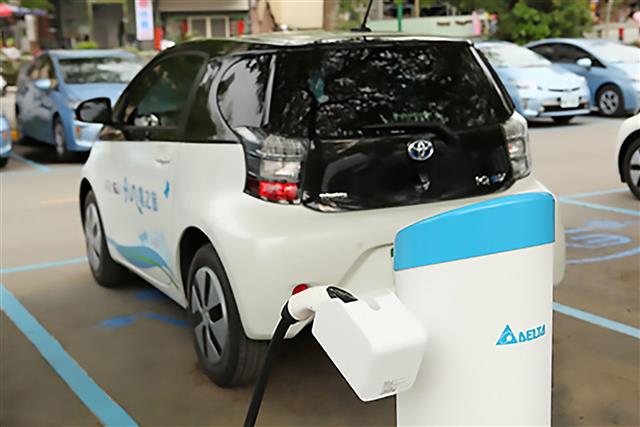 Delta Electronics is expected to benefit from increasing demand for electric vehicle (EV) charging stations in Europe, after the European Parliament in early June approved a proposed ban on selling new vehicles with combustion engines in 2035, according to industry sources.

The ban will result in a surge in EV infrastructure demand across Europe, and Delta is expected to be a direct beneficiary of emerging business opportunities generated by rising charging station demand, the sources said. The quality and stability of its charging stations, as well as its relationships with automakers will determine if Delta could cut into the European market successfully, the sources noted.

The sources said the market is optimistic about Delta's entry into the European EV charging station market because of its long-time investments in the US and Europe. They added that Lite-On could also benefit from Europe's growing charging station demand with its experience in power supply technologies.

Participants at the EU-Taiwan Electric Vehicle Conference on June 21 said all EU member states should help accelerate the development of Europe's EV charging infrastructure. The countries should look at the use of renewable energy, the installment of charging stations, and the distribution of power grids, they said.

While each EU member state has a different distribution density of EV charging stations, the European Parliament plans to increase the total number of charging stations in Europe from the current 310,000 to six million by 2030. To reach this goal, 14,000 new charging stations will need to be installed every week, but only 2,000 stations are being added each week currently, industry sources said.

European transport ministers also reached an agreement that EV charging stations should be deployed at least every 60 kilometers on Europe's roads by 2025. Charging stations for electric buses and trucks will have higher power requirements than those for passenger EVs.

Industry sources pointed out that EU's decision to ban the sale of combustion engine vehicles may be due to the Russia-Ukraine war, which has made Europe more aware of the risks of its heavy reliance on Russia's energy resources.

To realize transportation electrification, Europe must establish a complete charging infrastructure, and the numbers of EVs and charging stations should grow at a similar speed, the sources suggested. The number of EVs is increasing much faster than that of charging stations in Europe at present, they said.

Europe also needs to make EVs more affordable for them to become mainstream, the sources continued, noting that only European countries with higher GDP are seeing rising EV market penetration.

Europe also needs to ensure that workers in the combustion engine vehicle industry will receive employment opportunities in the EV industry, the sources said.

For the global EV industry, charging station hardware is no longer considered a high-tech sector, especially after the fast expansion of China's supply chain, the sources pointed out. However, Taiwan-based companies still have competitiveness against their Chinese rivals, as the technical threshold for developing charging station hardware that meet the requirements of European automakers remains relatively high, the sources explained.