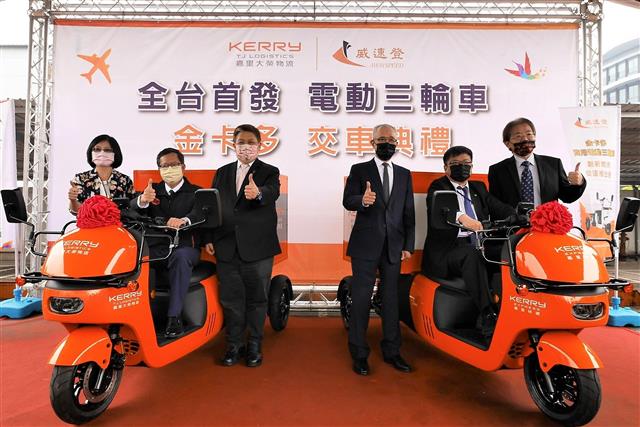 Awayspeed will launch new models for overseas markets in the second half of this year, according to the company.

The company on April 19 held a ceremony marking the delivery of the first batch of e-tricycles to the logistics client.

Awayspeed's e-tricycles can become the best partners for couriers working in e-commerce, logistics, and food delivery industries. Logistics firms have been waiting for such products, as the models can meet their demand for an alternative to trucks and scooters, he said.

The e-tricycle has a radius of gyration of only 2.5m and can carry up to 200kg of goods, 4-5 times more than a scooter. It can run up to 110km continuously on flat roads, allowing logistics to save time and personnel. Also, the tricycle is the only kind in Taiwan that has passed EU's regulations about cornering stability for L5e models, Chen said.

In the second half of this year, Awayspeed will launch rechargeable models for overseas markets, he said.

Awayspeed is working with other e-commerce platforms and Taoyuan's Takoham Environmental Sustainability Foundation, aiming to promote its tricycles to more agencies.

Next, it will develop customized models for drivers with varied needs and those working in remote areas, such as long-term service caregivers, and medical materials carriers, it said.

The electronic control units developed by Adata can be utilized by smart fleet management platforms to reduce inefficient deliveries and carbon emissions, it said.

Aeon Motor is one of Awayspeed's subcontractors for developing the tricycles.

In October 2021, Aeon launched the Ai-2 Gather scooter model that can accomodate Gogoro's battery swapping system, while it has also partnered with delivery service suppliers Lalamove and Momo.

It is expected that more e-tricycles will be used in the commercial delivery industry.

Taiwan's government has unveiled a roadmap to achieve carbon neutrality by 2050, including goals that all newly sold scooters and passenger cars should be electric by 2040, said deputy economics minister Tseng Wen-sheng.